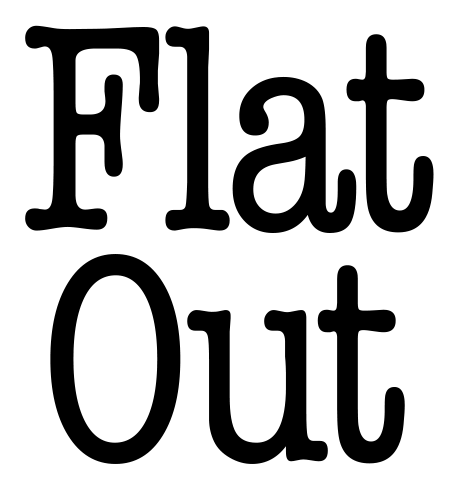 Flat Out invites authors to write under cover of one of the following personae in a specified genre. Proposals will be accepted on a rolling basis, with reviews conducted in April (fall issue) and October (spring issue). Audition with a 250-word abstract and one image. Send to editor@flatoutmag.org with the subject heading “Flat Out Audition.”

The Challenger
Architect with an outdated faith that it is still the job of architects to engage the work of their colleagues in a frank, open discussion. Passionate. Skeptical. Supportive. Fan of chain mail; guarantees that addressee will assume the role of challenger in the next issue with a missive to another architect. Letter to architect on their recently completed building in 1000 words.

The Genealogist
Architectural historian with an imaginative sensibility. After a bad experience with a doctoral advisor, took to hiding out in special collections. Writes love songs about objects as a revenge on scholarship. Plots unlikely futures by extrapolating from obscure sources. Speculative history of an overlooked design artifact in 2500 words.

The Opinionator
Astute critic with a proclivity for polemics. Maintains at least one opinion on everything. Takes on design topics of contemporary significance with one part indignation and two parts optimism. Has issues with authority; impatient for change. Op-ed piece in 2000 words.

The Mortician
Self-deprecating professional with a world-weary sense of humor. Makes death look good. Understands that the end of one thing is always the beginning of something else. Aficionado of remainder bins, and master in the art of investing the passé and unfashionable with the appearance of life. Memoir of a brush with death in 1500 words.

The Odd Couple
Felix and Oscar were roommates at architecture school and have entertained one another with their differences since. Felix became a fastidious designer, Oscar an irreverent writer. Their dissonant perspectives on design inevitably lead to unexpected revelations, awkward pauses, ecstatic interruptions, and at times surprising confluence. Illustrated conversation in 2700 words.

The Muckraker
Investigative journalist who follows the money. Asks the right questions, collects the facts, and exposes hypocrisy and stupidity in all its forms. In a world fixated on figures, makes those in power accountable for their record keeping. Unafraid to burn bridges. Would rather spend an evening with Bob Woodward than Robert Redford. Investigative exposé in 2000 words.

The Outsider
Itinerant raconteur who has assumed various roles in life—a puppet, a pauper, a pirate, a poet, a pawn, and a king—but never an architect. God, no. Has a bemused attachment for those with a will to practice such an odd profession nonetheless. Vignette of an encounter with an architect or architectural scene in 1000 words.

The Ad Man
Advertorial freelancer of few words and an old hand in the business. Fiercely committed to airing an opinion. Omnivorous consumer of all things architectural. Considers oneself a “jaded enthusiast.” Displays flair for inventing punchlines. Reviews of exhibitions, conferences, lectures, awards, books, and miscellanea in less than 100 words.

The Scorekeeper
Cool, original, independent-minded critic unafraid to clash with received wisdom. Grew up watching Siskel and Ebert and was crushed when no one supported idea for a sequel, “At the Buildings,” seriously. Honest and unmerciful. Likes to travel and mix it up with the locals. Review of a recent project, with rating on a five-point scale, in 1200 words.

The Graphic Essayist
Talented illustrator who, as a child, had school notebooks confiscated for endless doodles. Became an obsessive collector of marginalia and cognoscente of the caryatids who believes no column should go unfigured. Now fills spaces with freshness and rigor. Photographs, illustrations, or drawings comprising a series, in a 37.5 mm x 250 mm format; succinct captions optional.

The Inventor
Tinkerer, alchemist, mad scientist, evil genius. An unreformed generalist who enjoys taking things out of context and recharging them with architectural value. Convinced that most people severely overestimate the value of facts. Prefers consequences to truth. 1000-word eureka.

The Talent Agent
Independent entrepreneur who runs a boutique agency dedicated to seeking out and guiding the legacies of unsung design talent from the world’s midwest, wherever it may be located. Cultivates personal relationships, giving individualized promotion to misunderstood figures and underestimated careers. Unsolicited advice in 1000 words.

The Cameo
Well-known design writer accustomed to going un-credited for ideas; has a familiar voice that you can’t quite place. A has-been amused by the idea of playing self in the comeback. Drops over unannounced like a crazy uncle on shore leave, often requiring a cleanup crew afterward. Portrait of an architectural situation from a skewed viewpoint. Indeterminate length.

You
You write in the second person. What you see is what you write. You know who you are, where you’ve been, and where you’re going. You like to think you’re unique, and you are not alone in this. Second person travelogue of an architectural interior in 1800 words.